Februari is – of course – the month of love with Valentine’s day right around the corner, but in the Netherlands also the month when the Dutch celebrate Carnaval, especially in the southern provinces of the country.

What Wikipedia tells us about Carnaval.

“Carnival (Dutch: Carnaval; also called "vastenavond" – eve of the fasting or Limburgish: "vastelaovend") is an originally Pagan European spring festival, with an emphasis on role-reversal and suspension of social norms. The feast became assimilated by the Catholic Church and is celebrated in the three days preceding the Christian holidays of Ash Wednesday and Lent.[1]
From an anthropological point of view, Carnaval is a reversal ritual, in which social roles are reversed and norms about desired behavior are suspended.[2] Winter was thought of as the reign of the winter spirits that were to be driven out for the summer to return. Carnaval can thus be regarded as a rite of passage from darkness to light, from winter to summer: a fertility celebration, the first spring festival of the new year.[3]
In modern times the connection with religion has disappeared, though its date is still set before the start of the Christian feast of Lent. Also the core of the modern Carnaval has maintained its socially critical function by role reversal and temporary abandonment of social norms. The first day of Carnaval is six weeks before Easter Sunday. Carnaval officially begins on Sunday and lasts three days.[1]
Normal daily life comes to a stop for about a week in the southern part of the Netherlands during the Carnaval, with roads temporary blocked and many local businesses closed for the week as a result of employees who are en masse taking the days off during and the days after the Carnaval. Though according to tradition the feast lasts from Sunday until Tuesday. In recent years the feast usually starts on Saturday. Also Friday evening (or at schools at Friday afternoon) and in some places Thursday (Ouwe Wijven) are considered the start of Carnaval, which makes it a six days celebration. The festivities last the entire day and well into the nights. Some parades and many balls and bonte avonden or other meetings are held in the weeks before the official Carnaval, but never before the first official court meeting on 11 November. Historically the 40 days of Lent would start on Wednesday at midnight and continue until Easter. Nowadays it is still the official ending of Carnaval, though some Carnaval activities such as herring eating are traditionally held on Wednesday after Carnaval. Lent itself is generally not practiced anymore by the Southern Dutch population as a result of irreligion dominating the area nowadays”

if you go out celebrating Carnaval, eating good, solid food, is essential to last during the festivities. Food such as worstenbroodjes, erwtensoep, and balkenbrij are popular.

Balkenbrij is actually a traditional dish that you either love or hate.
Nowadays balkenbrij may contain slightly different ingredients, but this is the traditional recipe: 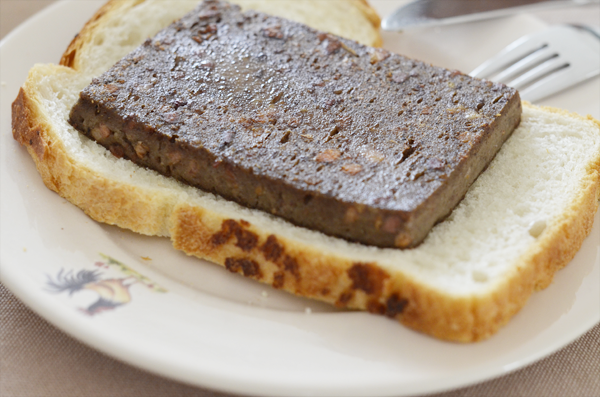 
Wash the pig's head and the Ham and cook in water with salt.
Take the meat off the bone and mince it together with the Ham.
Bring the mixture to taste with peper and salt, but keep in mind that stock and flour will be added.
Bring the cooking water to the boil, adding the 5 or 6 liters of water to it.
Add the meat mass, bring to the boil and mix as much (buckwheat)flour through it until it goes stiff. Taste the mixture and add salt if necessary.
Transfer into broad, not too deep dishes or cake tins which have been dusted with flour beforehand and leave to cool. Cut the Balkenbrij into slices of about a finger thick, flour them and fry quickly in lard or butter.