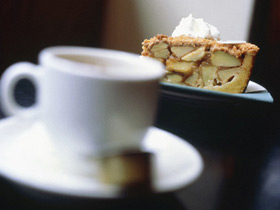 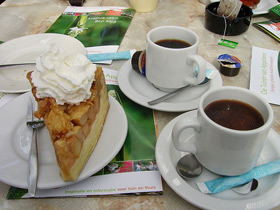 The apple pie in Holland actually looks quite different from the applie pies from other parts of the world. There is plenty of variations on the recipe though. For instance you can make it with cranberries, with lots of cinnamon and sugar, with almonds, with cheese, coconut and ginger, with pieces of biscuits, or even with blue berries. But for today we will stick to the traditional / original Dutch apple pie. It is a variation on the recipe that's printed on the Koopmans package. We made it a bit more sweet by adding vanilla and brown sugar, and a bit more sour by adding some lemon juice. This apple pie will give you a sweet and refreshing taste.

To make one apple pie.

Put the raisins in medium warm water to make them soft. Leave them in the water for about 15 minutes, that should be enough for a good nice softness.

Use two knifes to cut the butter into small chunks and mix it through the Koopmans mix, the brown sugar, vanilla sugar and salt. Once you have a crumble style mix, add 2/3 of the egg. Then knead the mix by hand or with a kitchen machine, until you have a good consistent dough. You can put the dough in the fridge if you want.

Peel the apples and cut them into small pieces. 1cm by 1cm or smaller. Then cover all the pieces of apple with the of lemon juice. If you prefer it more sour, you can add more juice. Sprinkle the apple pieces with the cinnamon, and sugar and mix well. Then add the raisins and mix well again.

Grease up the tin with soft butter (margarine or real butter) and then use use 2/3 of the dough to cover the bottom and the sides.

Bake the apple pie in a preheated oven for about 60-75 minutes. Electric oven: 180 Celcius or 356 Fahrenheit. Hot air oven: 165 Celcius or 329 Fahrenheit. Gasoven: position 3-4. The apple pie needs to become golden brown. Once fully baked, let it cool off for at least an hour, before you remove the tin shape. Some say that if you leave it in the fridge for two days, it will taste even better. Make sure you finish the apple pie within a week after baking it though. 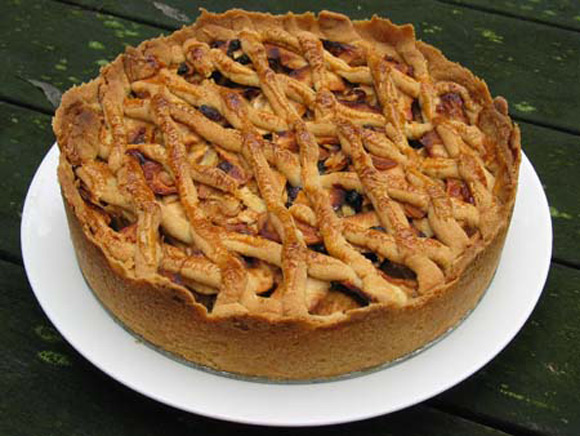