Orange madness!
On April 30th we celebrate Queen's Day, a national holiday in the Netherlands. Queen’s day is built around the birthday of the Dutch queen. But not the current queen, actually. Our queen Beatrix celebrates her own birthday (January 31st) in a modest way with her family. Beatrix decided at her coronation to keep April 30th as Queen’s day. This as a tribute to her mother, Juliana, who’s birthday was on April 30th.

Well, that’s nice. But what does it mean today? Nowadays there are a lot of different traditions around Queen’s Day. There are flea markets all over the country, where people sell their old stuff on the streets. On this day everybody and everything is coloured orange, the Dutch royal colour. Oranjebitter, a type of orange brandy, is a very popular alcoholic drink and Oranjetompoes, an orange pastry, is sold at bakeries all over the country. Througout the day the royal family visits one or two cities. They do a tour and a couple of games with the citizens. Most of the time old fashioned Dutch games like sack races and bite-the-cake.

Put on your orange shirt and play the game of bite-the-cake (koekhappen) on Queen’s day! Here are the instructions: 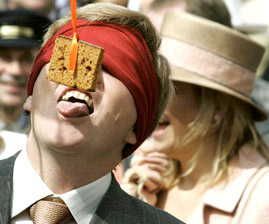 The Dutch heir to the throne Willem-Alexander competing in a game on Queen’s day.