Tony's Chocolonely - A Fresh Dutch Brand With A Mission!


Recently we have added various new products to the webshop.
Among them are several delicious Fair Trade chocolate bars from Tony’s Chocolonely.
Tony’s Chocolonely is a fresh, young, Dutch brand with a clear vision!
Read more about them and their mission in this blog.


In 2003, journalist Teun van de Keuken, learns that modern day slavery is still very real.
He starts doing research, and discovers that child slavery is a big problem in the west of Africa, where most of the cocoa comes from.
After this, he symbolically proclaims himself a ‘chocolate criminal’, and decides there’s work to be done. 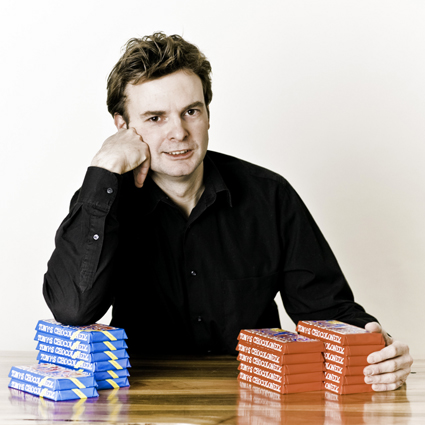 In 2005, the very first Tony’s bar is being made!
Teun is very determined to make changes in the cocoa industry. He gets in touch with Nestlé, to ask whether they can produce a ‘slavery-free chocolate bar’.
Nestlé can’t, and so Teun decides to take matters into his own hands, and create one of his own.
November 29th, 2005, the first 5000 fair trade milk chocolate bars hit the stores, but they are sold out very quickly and they end up ordering no less than 13000 bars!

In 2006 Tony’s goes official and registers with the chamber of commerce. In 2008, Verkade – another large manufacturer of chocolate products in the Netherlands- follows Tony’s good example, and switches to fair trade cocoa.

In 2012, Tony’s bars get a very distinct uneven pattern (see picture), to show the inequality in the world of chocolate. They thought it was weird to make a bar with even pieces when so much inequality is still going on.
2012 was a fruitful year for Tony’s. They created a fair trade chocolate milk, and different varieties of the bar are added to the family.
The cocoa comes straight from ‘ABOCFA’, a cooperation of farmers where they have a long term relationship with. This is a positive thing for the farmers, because this way they’re sure to sell their cocoa at a fair price for a longer period of time. It’s also good for Tony’s because they know exactly where their cocoa beans come from. 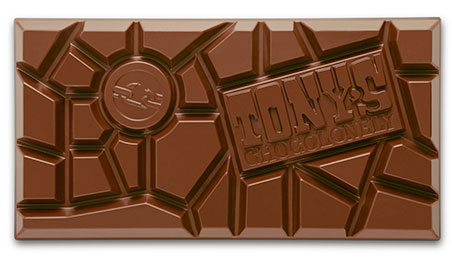 In 2013, Tony’s first ‘bean to bar’- bar is being made. This means that the cocoa in it, is 100% traceable, and comes from farmers in Ivory coast & Ghana, they know personally.
This is an important step towards 100% slavery-free chocolate. 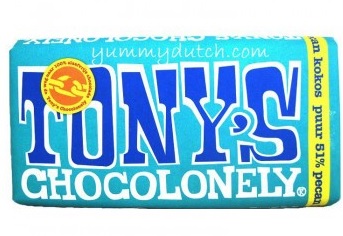 As you can see, Tony’s Chocolonely is a very extraordinary Dutch brand. One we are very proud to sell in our webshop!
At this moment we have the following products in our assortment: Not only is this chocolate you can eat without a guilty conscious, it’s incredibly tasty as well.
But we’re afraid you’ll just have to experience that on your own. ;-)

(information and pictures courtesy of www.tonyschocolonely.com)