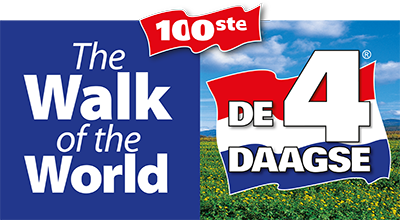 Tuesday the 19th it starts again, the one and only Nijmeegse Vierdaagse.
And this year it’s a very special one, because it is the 100th edition of the event!
The participants will have an extra challenge to beat this Vierdaagse, because weather forecasts are expecting the temperatures to rise above 30 degrees Celsius at some times. Normally 46.000 people can participate in the four-day-marches, but this one particular time, 50000 participants are allowed to join in celebration of the 100th Vierdaagse. Among them will be 5000 soldiers from 30+ countries.

What's this 'Vierdaagse' the Dutch love so much? 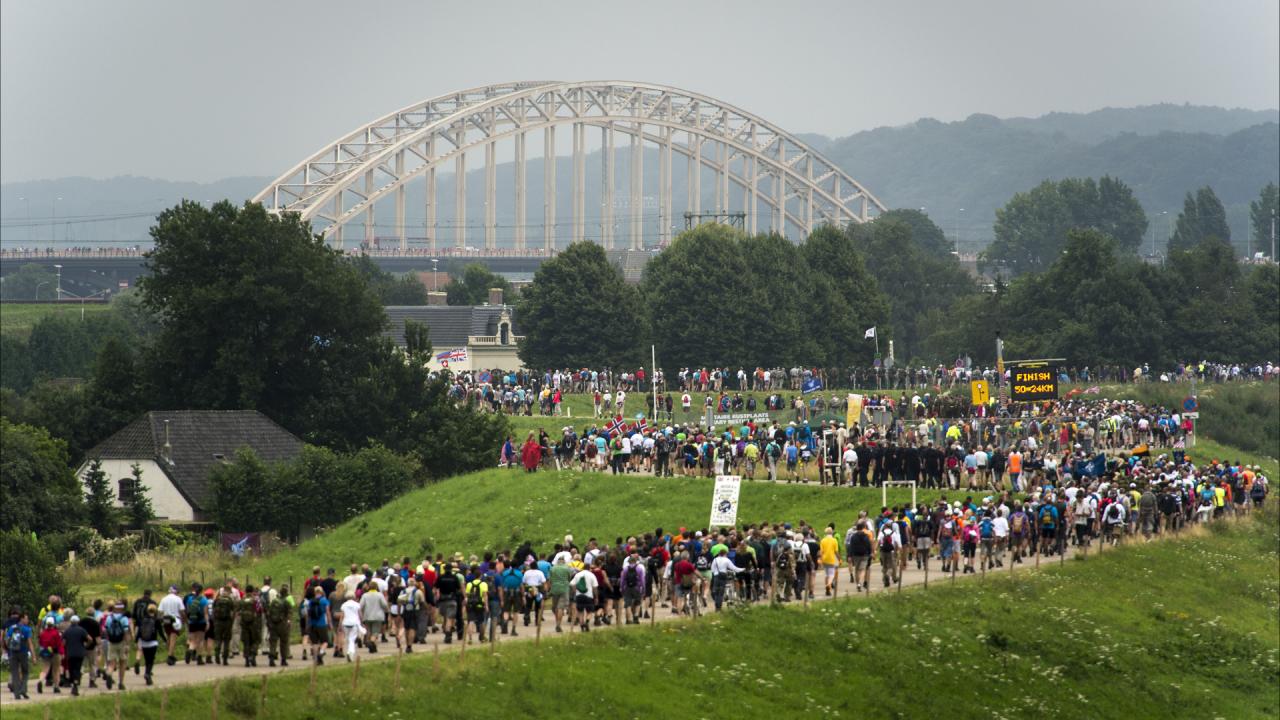 There are many people in the Netherlands, and even outside of the Netherlands, that look forward to the Nijmeegse Vierdaagse all year. And that is actually a good thing, because if you want to participate AND successfully finish, you definitely have to start practising early.
Participants of the Nijmeegse Vierdaagse walk 4 days in a row, and they can either choose to walk 30, 40 or 50 kilometers per day.
Participating soldiers have to walk at least 40 with their –filled- backpacks, or 50 kilometers a day without. Their backpacks must weigh at least 10 kilograms.
The Vierdaagse always starts on the third Tuesday of July, and it is the largest walking event that lasts for multiple days, in the world.
The Vierdaagse is combined with the Vierdaagsefeesten (Vierdaagse-festivities), which used to be the Nijmegen summer festivities. This means that the weekend before the actual marches start, there are loads of fun things to see and do in Nijmegen. There are fireworks along the river Waal, live music, food, etc. 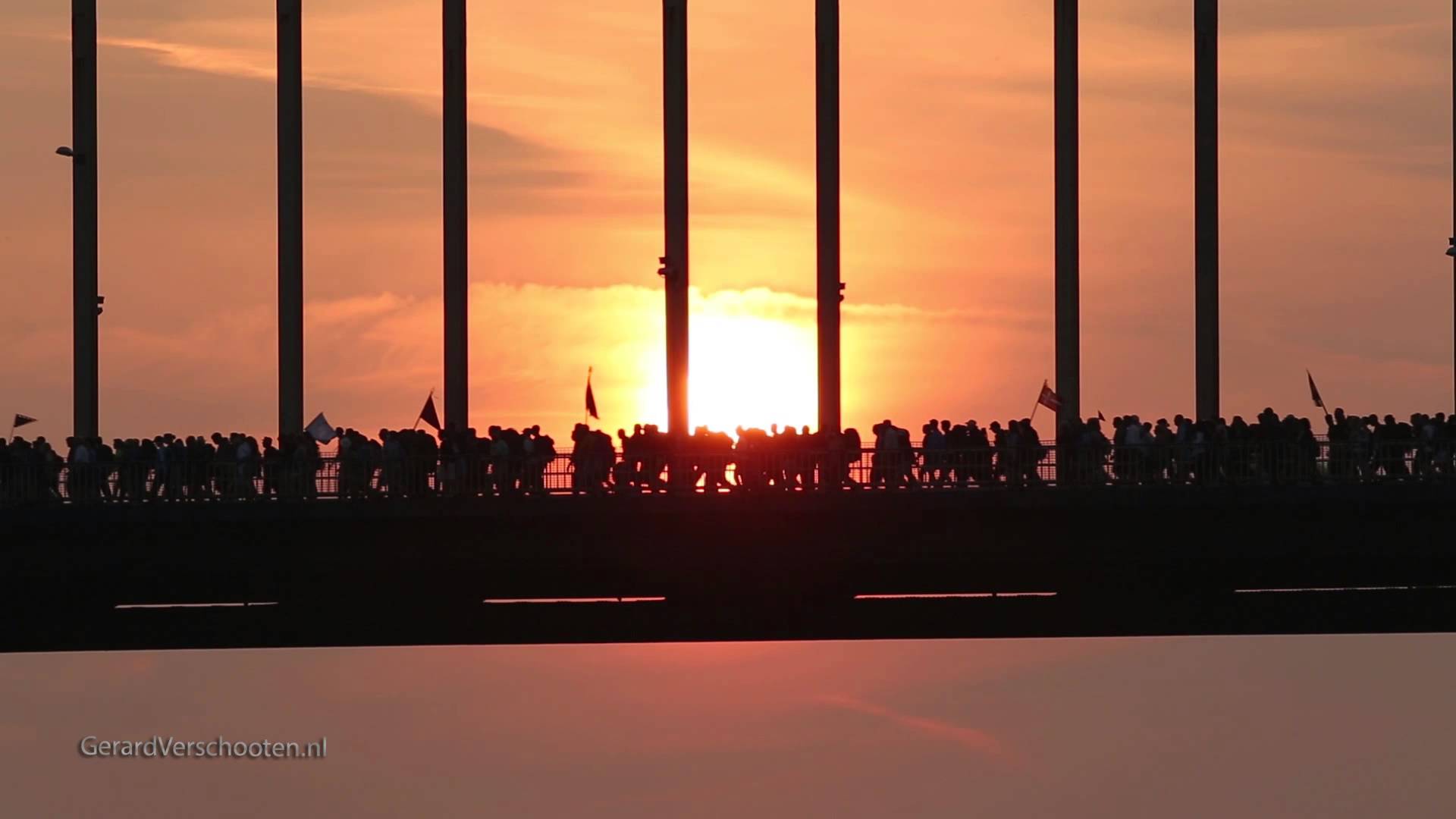 (Participants crossing the 'Waalbrug' at dawn - bridge over the river Waal)

Depending on the chosen walking distance, most participants can start walking at 4 in the morning, this will prove to be helpful this year because of the expected weather conditions.
Participants may finish no later than 5 p.m. the first three days and on the final day, Friday, they are allowed to finish until 6 p.m.
If you have managed to finish all four days, and without cheating, you will receive a ‘Vierdaagsekruis’. (see picture) 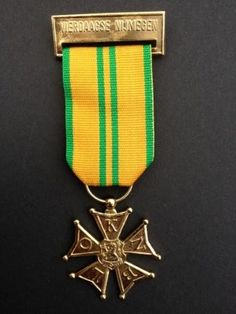 The first day of the Vierdaagse, participants go north. Both at the start as well as the finish, they will cross the Waalbrug bridge, Nijmegen’s most well-known landmark, and among the places they walk through, are Oosterhout, Bemmel, Huissen, Elst and Lent.
The second day, participants go west and this day is the day where the most dropouts occur. Especially among untrained participants.
Among the visited places are Wijchen and Beuningen.
The third day, places on the south side of Nijmegen are visited. This area is infamous for its hills, especially the ‘Zevenheuvelenweg’, a long road with many ups and downs. Places the participants walk through are Groesbeek, Mook, Milsbeek, Malden, Berg-en-dal and Ottersum.
The participating soldiers take a detour towards a military cemetary to honour Canadian soldiers that died in WW2.
The fourth and final day, the participants again go south, south west of Nijmegen. They walk through Grave, Gassel, Beers and Cuijk. In Cuijk, participants cross the river Maas by pontoon bridge, and head back towards Nijmegen after that.
When they arrive in Nijmegen, they enter the Via Gladiola. Normally this long lane is called Sint Annastraat, but every year the Friday of the Vierdaagse it is temporarily called Via Gladiola because participants that cross the finish line will receive Gladiolus/Sword lilies (Gladiolen in Dutch) from the MANY bystanders, friends and family that welcome them.
Later on, they receive their Vierdaagse-kruisje if they’ve met all conditions during those four days.
You can imagine how busy the first aid posts are treating blisters during those days!

Dutch soldiers are allowed to wear this Vierdaagse-cross on their uniforms in both the Netherlands and foreign countries.

Only in 2006 the Vierdaagse got cancelled after the first day. It was extremely hot, and many participants got overheated. Two people died, one during the marches and one after having completed the first day. Even higher temperatures were predicted for the following days, so the organization decided it was irresponsible to proceed.

For this 100th edition, there’s an extra option to choose from: you can choose to walk a 55 kilometer route.

Every year participants from over 70 different countries join the marches. Incredible!

2003 holds the record for most finishing participants: 44812 started on Tuesday, and 40706 of them crossed the finish line on Friday!
Bert van der Lans walked his 69th Vierdaagse, and finished for the 68th time! He therefore holds the record for most finished Vierdaagse marches. The only one he couldn’t finish, was of course the unfortunate Vierdaagse of 2006, which was cut short due to the extreme weather. 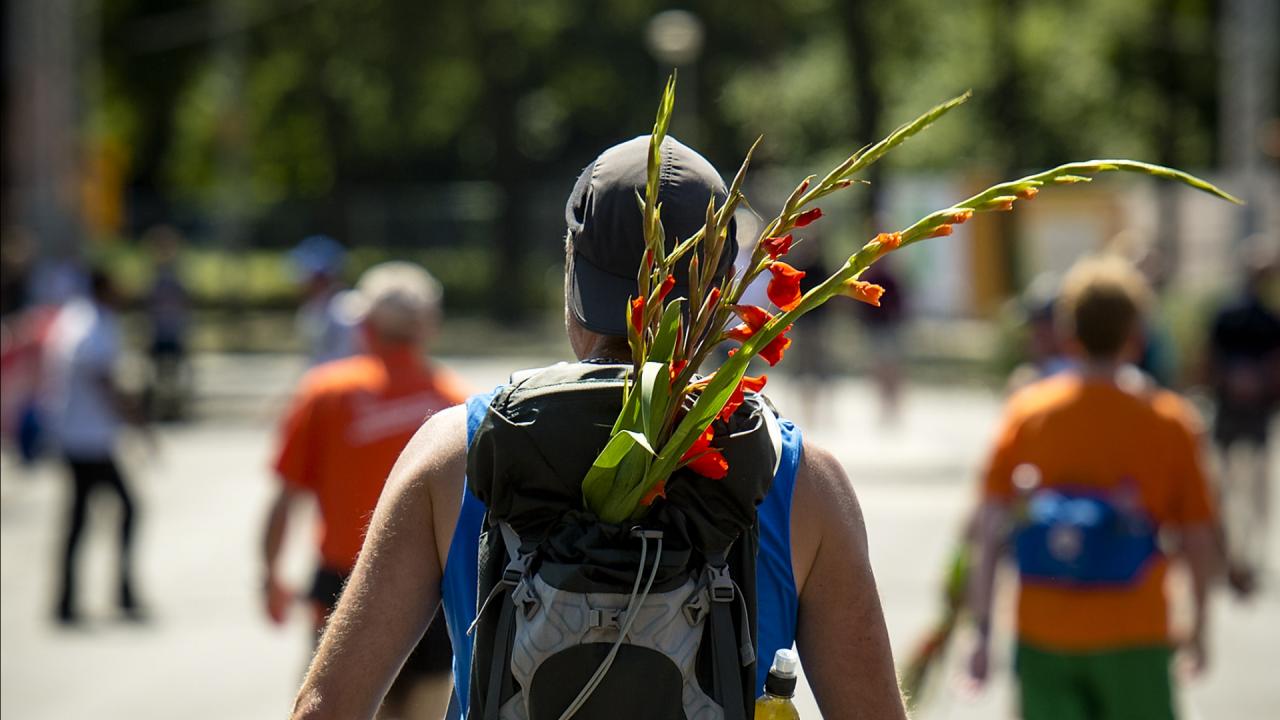