One of the most popular snacks in Holland is the famous bitterbal. The bitterbal refers to consuming this awesome snack, while drinking - the bitter is the drink ;). 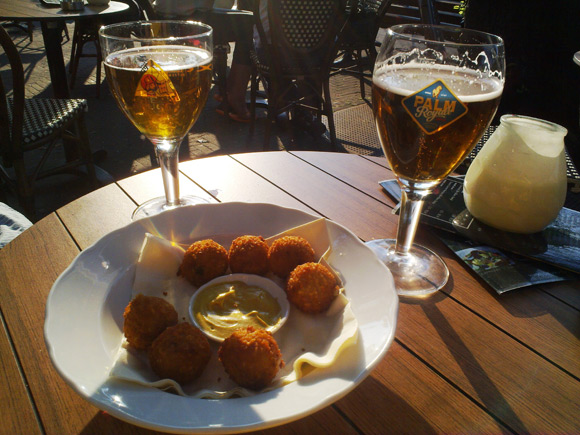 The bitterbal is actually the same as the famous dutch "kroket", but the kroket is basically a log shaped version of the round bitterbal. The krokets are often consumed without the drinking session, you just go to the local snackbar to get one (usually in combination with fries or so). However, the bitterbal is usually part of a 'bittergarnituur', which is a collection of deepfried bite-sized snacks and as mentioned, are often consumend while drinking. In Holland you can buy frozen boxes full of bittergarnituurs, which are deepfried and served at home on parties and other drinking sessions (like watching the World Cup or Euro Cup soccer). However, the frozen packages are not for sale outside of Holland, so that is why we are posting this recipe - just make them yourself!

The bitterballs actually consist out of a mashed meat paste, traditionally from beef, which is shaped like a little ball and then rolled in breadcrums with eggs to make it stick. Then the entire ball gets deepfried in oil. The meat paste however can also be made from chicken, pork or even vedgetables. For todays recipe will choose for the traditional beef - the original - bitterbal.

First chop the beef into small cubes. Then we are going to simmer the beef, long and slowly, so you need a good simmer-pan. Add the butter in the pan and melt it until it's golden brown. Then add the water and the beefstock cubes and mix the contents to a smooth mixture/sauce. Then add the beef cubes. Put the gas on low and put the lid on the pan. You should check often to see if the meat is still only simmering. It can never actually cook.

After three hours of simmering the meat is ready. Take the mout out of the pan and put it on a cutting board. Then use two forks to spread the meat, until the meat is completely shredded. When done, put the meat back into the pan. Now mix the 50 grams of flour with a bowl of water and stir into a liquid sauce. (not too thick, not too thin). Add it into the pan as well and stir very well. Make sure no chunks are created, keep stirring until the entire mixture becomes one sticky thick sauce, which is going to be the contents of the bitterbal. In Dutch we call that ragoÃ»t. You can add some nutmeg to flavour up the mixture. You can also create your own extra spices to make your very own bitterballs. Maybe some chilipowder for the spicy lovers ;). When the mixture has the flavour you desire, you can turn off the heat and let it cool off with the lid slightly open. Once the pan is not hot anymore, poor the mixture into its own container. Put the container in the fridge for several hours (or an entire night), which makes the butter become harder again.

When the mixture is hard and it is all consolidated, you can start preparing the actual bitterballs. Take out (a part) of the mixture. Keep in mind, the longer the mixture is outside of the fridge, the softer it gets and the harder it is again to create the little balls. So, to get started, break the two eggs into a bowl and stir them until mixed fully. Then add breadcrums on a plate and if your bitterbal mixture is very sticky, you might also wanna add some flour on another plate to put on your fingers when creating the balls. Then, with your fingers, take a piece of 'raqoÃ»t' and between your handpalms, roll it into a ball. Then roll it through the breadcrums, then into the egg (make sure its completely covered - it must be dripping) and then roll it again through the breadcrums. Once you have done all your mixture, you can either freeze them in a box right away, or you can deep fry them into the end product. It should look like this: 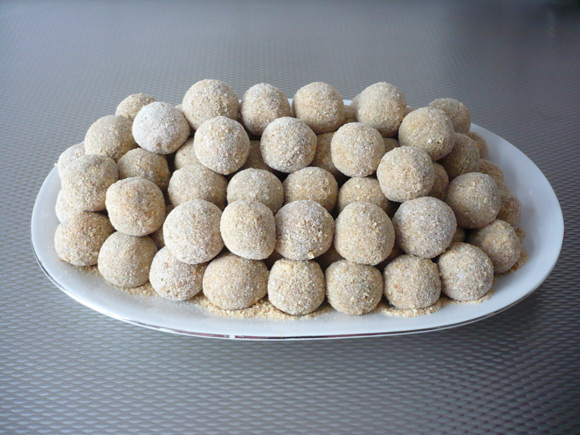 To deep fry the bitterballs, your oil must be 180 degrees Celcius, or 350F. If the bitterballs are frozen, it takes 5 minutes before they're ready, otherwise 4 minutes will do.