Have you been good ...?
The story tells us that Sinterklaas rides on his white horse ('schimmel') on the evening of December 5th, accompanied by his black servant ('Zwarte Piet'). The schimmel has magic powers and rides the roofs of the houses. Zwarte Piet is quite an acrobat, he can climb the roofs and jumps from one to another. Throughout the year, Piet has pulled the same trick and has 'spied' on the children by listening through the chimneys. He reports back to Sinterklaas whether they have been good or bad. If the children have been good, they will receive a present. Piet climbs through the chimney and puts the presents in the shoes. And that's why Piet is black, the chimney soot colors his face! Of course there are different interpretations why Piet is black, other stories tell us that Piet is a Moor. Sinterklaas comes from Spain after all.

Back to the presents
Originally it was only 'allowed' on December 5th to put your shoe beneath the chimney. But since December 5th has become the big party, children are allowed to put their shoes starting on the day that Sinterklaas is in town. Children put little treats in their shoes for the schimmel (carrots, sugar cubes, hay or a bowl of water) and of course their list of desired presents. In return the children get candy (pepernoten, marsepein, chocolate letters, you can buy them all in our webshop) or a little present. The big presents arrive on the birthday of Sinterklaas, December 5th. If the children are lucky Sinterklaas even comes for a visit. Otherwise the gunny bag with presents is placed in front of the door, followed by fierce knocking on the door by Piet.

Or bad ...?
Some children think to be smart and collect all of their shoes, in hope to get as many presents as possible. When my brother was little he had put his sandals, sneakers, boots, wooden shoes, roller skates and all the other shoes he could find in front of the fire place. Unfortunately he didnâ€™t get any presents! Sinterklaas doesn't like greedy children. My brother escaped from spanking with the roe (a chimney sweep's broom made of willow branches) by Piet in the nick of time.

A little magic
But what if the modern families don't have a chimney I hear you think. In that case, the children may put the shoes next to the central heating unit. Typical, children sometimes wonder how Piet can climb through the pipes of the heating unit. Of course the parents will always have an explanation. Piet has a key to the house or another little lie to keep the magic story of Sinterklaas alive. 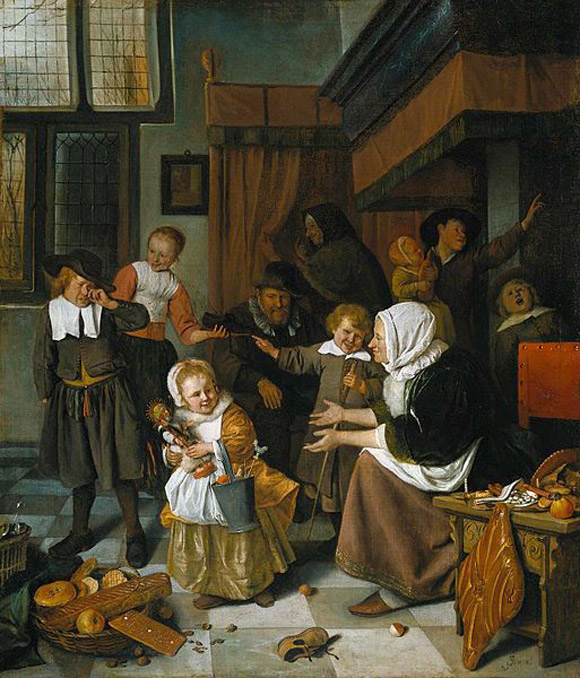 The Feast of Saint Nicholas (1665-1668), is a painting by Dutch master Jan Steen, which can now be found in the Rijksmuseum in Amsterdam.