'Koek en zopie' to keep skaters warm
This year's winter is lousy in Holland. There's no snow on the roofs, no ice on the water. Just rain, more rain and some storm now and then. Noting compared to a good 'horror winter' like in 1963. On january 18th that year 10.000 skaters started the traditional 'Elfstedentocht' (in English: 'Eleven cities tour'); a skating competition over 200 kilometers of ice.

Elfstedentocht
The Elfstedentocht is the world's largest and longest speed skating competition and leisure skating tour, and is held irregularly in the province of Friesland. The tour is conducted on frozen canals, rivers and lakes between the eleven historic Frisian cities: Leeuwarden, Sneek, IJlst, Sloten, Stavoren, Hindeloopen, Workum, Bolsward, Harlingen, Franeker and Dokkum. The tour is not held every year, mostly because not every Dutch winter permits skating on natural ice.

Horrendous conditions in '63
But in 1963 there was lots of ice on the Frisian waters. On the day of the Elfstedentocht the temperature was -18°C, and felt even worse because of the harsh eastern wind. The skaters tried to prepare themselves for the cold by wearing wollen underwear, skarfs, hats and sometimes newspapers beneath there clothes to prevent the freezing wind from penetrating into their skating pants and coats. But the conditions were so horrendous, only 69 of the 10.000 contestants finished the race. Reinier Paping, the winner, became a national hero, and the tour itself legendary.

'Koek en zopie'
In every city the skaters stopped to get a stamp, so they could prove to have completed the tour in the end. Around the stampingposts there were little stands that sold hot food and drinks to keep the skaters warm. 'Koek en zopie' is the traditional name for these stands. 'Koek' is the generic term for cookies and 'zopie' is an old recipe for a warm mix of beer, rum and spices.

We'd like to share the recipe of 'zopie' with you, so you can repare yourself for a nice skating tour in your country possibly.

Put the beer with te cinnamon, cloves and lemon on the stove and let it boil. Let it simmer for 20 minutes. Stir the sugar with the eggs and bind the beermix wit hit. Add the rum at the last moment and serve when it's still hot! Do you want to stay sober on the ice? Some hot chocolate will of course also do, or a nice cup of Dutch pea soup ('erwtensoep' or 'snert'). Enjoy!

Written bij DelicaTessa, with thanks to Wikipedia for some of the facts about the Elfstedentocht and the recipe for 'zopie'. 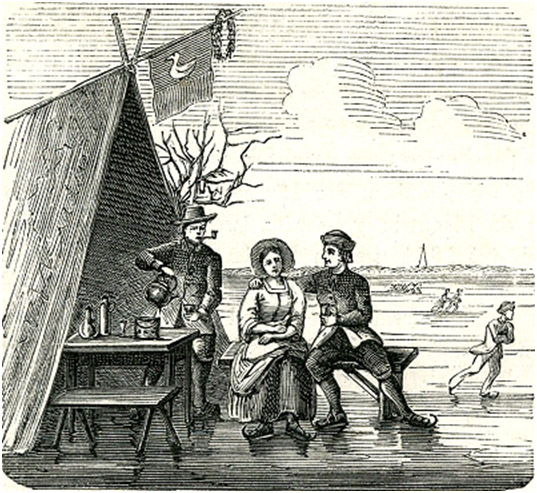