With the summer coming to an end and autumn slowly kicking in, it is also time for the more winter-style dinners again in Holland. This summer in Holland was probably one of the worst we had in years and autumn already had the overhand for a few weeks here in Holland. In Canada it must have probably be one of the best summers ever, but here in Holland we are often stuck with lower temperatures and lots of wind. And since Holland was and still is a strong agricultural country with lots of farmers and glass houses (nurseries), winter meals like "boerenkool met worst" (boerenkool with a sausage) are amazingly popular. They are very healthy and make you more resistant to the cold ;). This is what the dish looks like:

In case you do not know what boerenkool is: it is a curly type of green cabbage that looks like this:

And a beautiful image of the cabbage on the land with the frost on top of it: 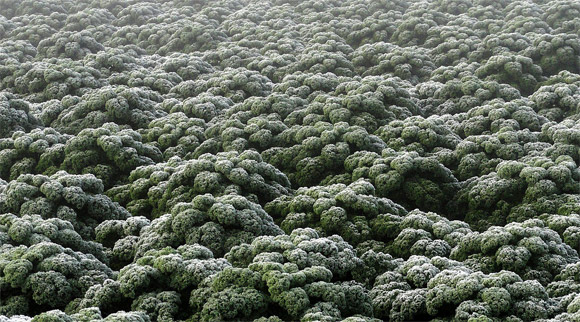 There are many ways to make boerenkool with sausage, but in essence they are all the same. One of the most important things though is that the actual boerenkool, whether you bought it fresh or cut and cleaned in a plastic bag, must have had a night of serious frost. Commonly, back in the day in Holland it froze every winter and it is after a night of frost that the Boerenkool starts tasting at its best. So if you bought a bag with the veggie, cut and cleaned, make sure you put it in the freezer for at least one night before you cook it. Of course you can do the same with the fresh version of the vegetable, but it is recommended to cut it up first then. The recipe that we do today will be the basic one, but you can expand it by adding fried onion and fried bacon.

After about 25 to 30min it should be ready. Check often during the cooking period and don't cook it too fast, but just let it cook gently. The boerenkool should have shrunk quite a bit and the potatoes should be cooked enough to mash them.

Now take the rookworst and follow the instructions on the package to warm it up. It can be done in water or in the microwave.

When you take off the pan from the fire, you have to extract the cooking fluids. Put them into a seperate bowl as you might need them again.

Then use the masher to mash the potatoes and boerenkool into one big stew. If it is very dry, you can add some of the cooking fluids. Also, it is recommended to remove some potatoes at first and only add the rest if you wish. Usually around 8 to 10 potatoes is good, but it depends on whether you like it to be quite potatoe-y or whether you prefer it to be more boerenkool-ish. Play with the amount of potatoes to give it the perfect mixture / flavour that you desire and remember for next time ;).

Take the rookworst, cut it into slices and serve it alongside the stew on the plate.

If you like to give it an extra twist, you can fry the onion, bacon and garlic (or only one of these ingredients) and add it to the end stew.

Love this!!! I like mine with vinegar!! Another one I love is beets and bacon. Ill type it as it sounds croshus and spec LOL. Not too good on the arteries but nice on the tastebuds. Especially on a cold day. I dont see that recipe here though. Hint Hint
» To be able to add comments or favorites you need a Yummy Dutch account «
click here to create an account »